NB! Sound was an afterthought, literally added at the last minute. In case it is too jarring, M to mute.

A combination of 2D action platforming dungeon grinding and MasterMind

Find the correct items the gods want to be sacrificed at the altar at the end of the dungeon - they are picky, they also need to be COLLECTED in the correct order! - or face the wrath of the gods as they sent you back to the start of the dungeon, which is now inexplicably more dangerous.

When defeating enemies, you get points which you can spend when you inevitably fail on your quest. You won't fail forever though - the gods aren't without mercy, and they give vague hints when you do the offering. Maybe one of the items was the correct shape? Or perhaps one had the correct symbol in it? Or it was in a correct position? Or some combination of the three - or better yet, all of them? They will tell you, though with cryptic symbols. You will also see your past sacrifices and their hints to help you figure out what the gods really want.

The temple itself being woven inside in the fabric of space time, and logical rules of traversal do not apply. Rest assured though - the same exit you used to get to another room, will bring you back. Sometimes the rooms seem to overlap, and spiral into themselves. Luckily you have no retry limit to learn the layout - except of course until the lock-keepers decide that they have had enough. Which is coincidentally exactly 9 tries. Don't ask, we have no clue either.

Gamepad support might be in there. Or not. Can't really say for sure. Test it? If it works then I implemented it. 😅

My main motivation behind joining this gamejam was to have an excuse to practice more pixel art, with a restricted, 16-color RGBI palette at that, and with a screen resolution of 256x192. (Spoiler alert: I failed a bit at the screen resolution, I realized too late that I had designed the room generation to fill the whole 256x192 resolution, and I still needed some HUD elements. So I cheated a bit and increased the height to 208 pixels. It's barely noticeable.😐 ).

All the sprite and tile elements needed to fit in a single 128x128 tilesheet image, which consists of 256 8x8 sprites/tiles. The reason for this arbitrary specificity is my hobby project, KAPE 8bit, which is an 8bit homebrew computer/console I've been making for almost a year now, since summer 2020. These restrictions mirror the capabilities of KAPE 8bit quite closely, and I want to practice making pixel graphics for it and eventually make (somewhat) enjoyable games for it. You can read more about it here: KAPE 8bit blog

The first part of the game is running and jumping around in a procedurally generated dungeon. You have to collect jewels, and after you have 3 collected, exits light up and enter any to enter the end puzzle room, the MindGrind Master. The puzzle is a modified MasterMind, with 3 different shapes, and 3 different symbols (the symbols are also designated with colors). There are also no duplicates in the code. If you brought the correct jewels in the correct order, you win and are given access to the treasures inside the temple dungeon. If not, you are thrown back to the upgrade menu, where you can upgrade your character, and see the hints for the mastermind code.  It is recommended you analyze the mastermind code here, and when you have decided what combination you try out next, you can use the "Set Reminder" feature to set yourself the combination you are thinking about. This Reminder combination will be shown on the top of your screen during dungeon gameplay, so that you don't have to frustratingly keep forgetting what you combination you were going for. You can still change your mind during gameplay though, it's just a reminder you put there yourself!

NB. The hints are not indicative of position per se! First, full on correct symbols are counted and hints shown for that. ie. You have 2 of 3 correct (the hints don't tell you which ones) so you get 2 fully correct hint markers before anything else. Then correct jewels (same shape and symbol/color) are counted, and shown. Then shape  only, and lastly symbol/color only. With these hints it should be possible to deduce the correct code in max 9 attempts.

NB2. Max attempts aren't limited, as I didn't have the time to implement an "attempt" limit, but the screen runs out of space to show more hints, so there's your automatic limit then kinda :D

I worked out what was going on quickly enough, and I love the idea of combining the mastermind mechanic with the dungeon crawling I think there could be a really cool almost rogue-lite game in that.

I did really struggle with the enemies though, the angles they came at me from made it really hard to shoot as they would go just above/below my magic and in some cases I’d be unable to jump them because of platforms. Because of that I didn’t get too far, but if i understand the gods hints then I did get at least 2 gems right before giving up.

Controls were a bit floaty but as I’ve noticed from a few games that’s just a personal preference. I also really liked reading about your self imposed 128x128 limit. Those sorts of challenges are a lot of fun!

Thanks for trying out my game!

My personal major grievances that I'd like to have had time to improve are floaty controls (they were a lot floatier in the beginning though so I did manage to get some progress in this area), the claustrophobic levels (I was thinking that even a simple player character minifying from current a height 32 to 24 might change the available manouever area enough to have major impact) and the enemy behaviour, or rather, the unfairness of it.

Nothing impossible, but would've required a couple days of massaging to get to something a bit more reasonable. Might or might not revisit postjam.

Thank you for the feedback!

The game had me confused at the start, since I wasn't sure exactly what to do.

Have you thought about some kind of tutorial or text at the start?

Overall the game was really fun and I like what you did with the theme and the restrictions!

Thanks for trying my game out!

Did you figure the game out eventually though? Tutorial or easier levels first to teach the player how to play it was planned, but you know how it is in game jams. Time always runs out. I might revisit this later, fix the audio, make some animations, and either do some easing in or tutorial or something, I'll have to think it through Post-Jam.

Suggestions for making the goals clearer are always appreciated and will be taken under advisement!

The game was fun, but I felt like it was too confusing at start. Also your linux executable doesn't have execution rights. I will send you a fixed file on discord.

Thanks for testing out the game! Yes, I can totally see how it would be confusing at start. I'm not even sure how I would go about making it less confusing while still maintaining the same micro/macro-loop mechanic...  🤔 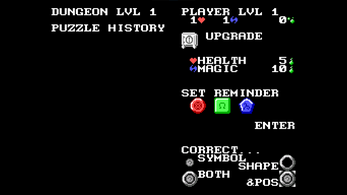 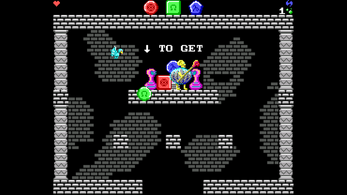 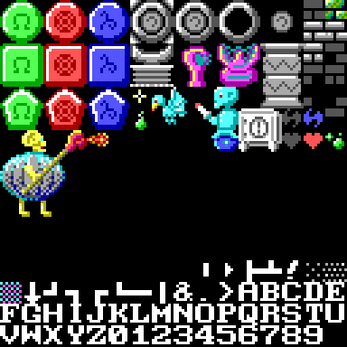